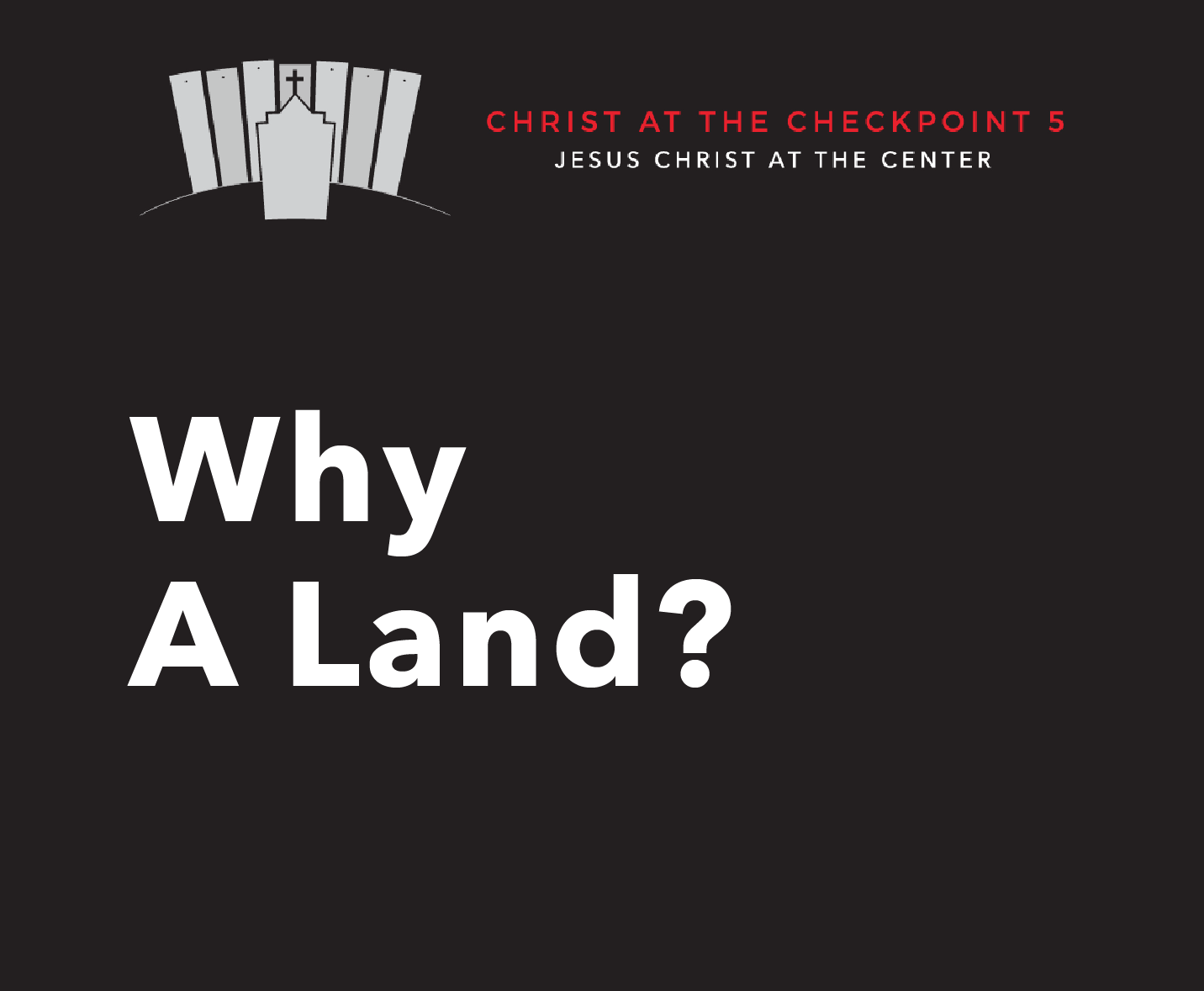 Have you ever asked yourself: “Why did God promised Abraham and his descendants a land, to begin with?” Really, think with me: why didn’t God simply tell Abraham to wonder around in the universe and preach the message of the living God? Why was the land necessary?
To answer this question, we suggest that we start in the garden of Eden and the fall and expulsion from Eden, and read the election of Abraham and the assignment of land to his seed in as restoring humanity back to Eden. As Hamilton observes:
The blessing of Abraham promised seed, land, and blessing. The promise of seed overcomes the cursed difficulty of childbearing and the loss of harmony between the man and the woman. The promise of land hints at a place where God will once again dwell with his people. The promise of blessing heralds the triumph of the seed of the woman over the seed of the serpent.

Looking at the land from this perspective, we can conclude that the land promise is not an end in itself, but rather the first step of an answer to a universal and human problem. Israel is not promised and given the land for her sake or for the sake of receiving a land. Israel is chosen and given a land so that she becomes “the vehicle by which the blessing of redemption would eventually embrace the rest of humanity”. Through Abraham and the newly established community, and from this newly Promised Land, the families of the earth are to be blessed, and Abraham will eventually become the “father of many nations”.
We should also notice the pattern that is echoed in OT biblical theology – that of a blessed humanity filling the earth. According to the biblical canon, God’s first communication with humanity included a blessing followed by a commandment:
And God blessed them. And God said to them, “Be fruitful and multiply and fill the earth and subdue it, and have dominion…” (Gen. 1:28)

This calling is precisely what is echoed in God’s calling of Abraham– something which we might fail to see if we start the biblical theology of the land in Gen. 12. To be sure, Israel may have started in Gen. 12, but she remains only one ingredient of the Bible’s overarching story. The biblical story starts before Israel, and will go on after and beyond Israel. The biblical hope for the redemption of Israel and her land is ultimately a biblical hope for the redemption of the world and its nations.
In addition, the giving of a land as part of this project of redemption highlights that God is committed to his created order and to the redemption of human society. Redemption in the OT is not merely about individuals, personal piety, or spiritual existential experiences. It is about redeeming whole societies on earth, and ultimately the whole of humanity. It is an “earthly” phenomenon.
Indeed, the biblical storyline could have been different: God could have given Abraham moral commandments for himself and his family. He could have instructed him to wander around in the world proclaiming the worship of the one true God. Instead, he chooses to bring Abraham to a place, to engage in human history and geography, and to create from Abraham’s descendants a unique and distinct society – one that would reflect his image on earth in the midst of the nations. This is the biblical pattern of redemption.
All of this then pushes us to the conclusion that the theology of the land, following the pattern of Eden, is not about a small piece of real estate in the ANE or about the small ethnic group that inherited it. The land is part of a larger scheme that is about redeeming and restoring the whole of creation. The restoration of the whole earth starts with one particular land and one family.
Moreover, Israel was supposed to be an ideal community in the midst of the nations (Ex. 19:5). As such, the regulations and laws about the land in Israelite society can be viewed as a model for the ideal in ancient times. Chris Wright calls this “a paradigmatic understanding” of the relevance of OT Israel to other nations in other lands. Wright’s book Old Testament Ethics for the People of God explores some of the land laws in the OT in detail, and their relevance for today’s world. He argues:
Many of the OT laws and institutions of land use indicate an overriding concern to preserve this comparative equality of families on the land. So the economic system also was geared institutionally and in principle towards the preservation of a broadly based equality and self-sufficiency of families on the land, and to the protection of the weakest, the poorest and the threatened – and not to interests of wealthy, landowning elite minority.

Wright observes for example how in the Canaanite society the king owned all the land and there were feudal arrangements with those who lived and worked on it as tax-paying tenant peasants. Meanwhile, the land in Israel was divided up as widely as possible into multiple-ownership by extended families. In other words, Israel’s way of the living in the land was supposed to be an example and a challenge for other nations in other lands.
Finally, this pattern of choosing a nation and a land and dwelling in the midst of people underscores God’s desire for fellowship with humanity. The OT portrays God as a God who seeks to dwell among humanity. This is evident throughout the OT biblical history, whether in the Garden of Eden, the tabernacle, or the temple. It is in this sense that we could describe the faith of Israel as “incarnational”.