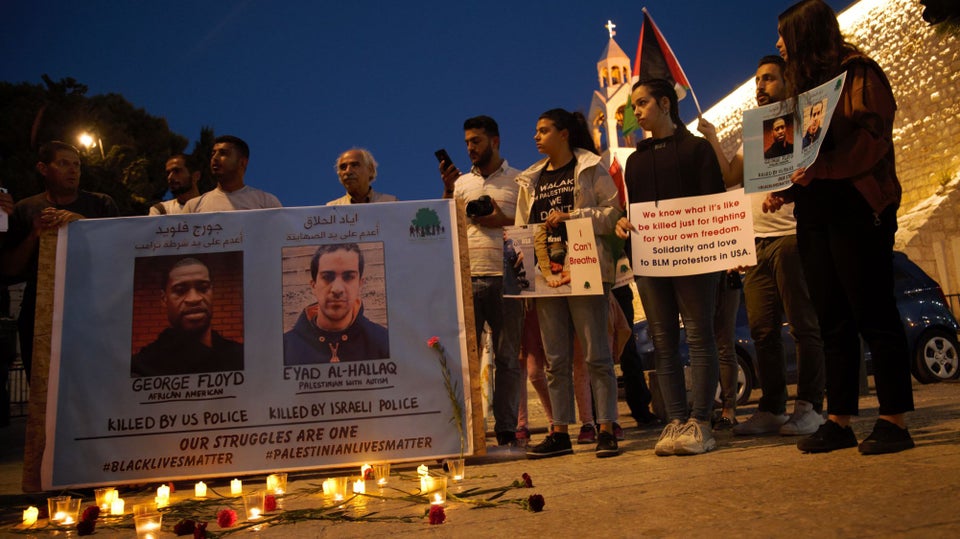 We cannot ignore what is happening in our world today in general, and in our land in particular. The recent events have overshadowed us. In the past few months, there has been a lot of talk about the post-corona world. If this week’s events are an indication of the post-corona world, I think the implications are very sad.

Today my heart is heavy.  We finally emerged out of quarantine only to be reminded in the most horrific ways that the coronavirus is not the most dangerous epidemic facing humanity. There is something more dangerous and uglier than corona:  racism, occupation, and many other kinds of injustice and oppression.

There is George Floyd, an African American man who was brutally killed by a white police officer. George posed no threat or danger. He shouldn’t have been killed. “I can’t breathe,” he gasped. Despite calls for mercy from him and the bystanders, no one responded, as if his life had no value. His life may be worthless to some, but it is very precious to God.

As Palestinians, we deeply sympathized with him when we saw the video. His experience is familiar to us, both literally and symbolically. Literally, we relate to his experience in terms of the method of arrest and the pressing on the neck.  Immediately following his death, many pictures of Israeli soldiers with their knees on the necks of Palestinians were posted on the social media pages, and some artists painted expressive pictures showing the two scenes together.

Symbolically, we relate to his experience because we also “cannot breathe.” The wall, the colonies and checkpoints suffocate us. They took the land, water and air from us, and with covetousness they still want even more.  The strong are backed by the Caesar of the White House.  They make the laws and are the rulers and executioners of them.

Following the death of George Floyd in the USA, we experienced two painful incidents here in Palestine.   Fadi Samara, father of five, was killed by the occupation soldiers near Nabi Saleh village, on the pretext that he was attempting to run soldiers over with his car.  The eyewitnesses of the event deny this version of the story. I could not help but think that this might one day be my fate at these checkpoints if I should misunderstand the occupation soldier’s signal when I am stopped. Yes, for the Israeli soldiers at the checkpoints, our lives are cheap. This is the reality, but our lives are still precious to God.

A few days later, Iyad al-Hallaq, a 32-year old man with autism was killed without justification or mercy.  He did not have to die. This is the cruelty of the occupation. When they take our lives they also strip themselves of their humanity.

Of course, we will not wait for the occupation to achieve justice.  Occupations are unjust by their very nature.  How many Palestinians have been killed without account?  I will say it again:  our lives are cheap for them, but they are very precious to God. We cannot forget that.

I also want to mention another type of crime that is still spreading on our land. This week we read about M. G., a twenty-one-year-old “daughter.” We did not even know her name, as if it was worthless. She  was taken to a hospital in Deir al-Balah in Gaza in a very serious condition, with bruising and marks on her body, and she died there. The cause of death was severe beating on her head and parts of her body. Initial reports indicate that her father is responsible for her death. For some, “honor” made her death permissible, but it is precious to God. We cannot forget that.

There are things that are more dangerous and far worse than corona.

We must lament the violence in our world today, while hoping such incidents will not become “normal.”  We do not want to “get used to it” and so lose our feelings. Lamentation is important for a person who believes in God. In the Bible, there is a complete book on Lamentation and many psalms of lament too. We must be willing to feel the pain and cry to God, asking Him for mercy, justice and truth. We also should do what we can to change them. We should resist the “normalizing” of these things.

Lamentation is important, as it leads us to change the reality that we lament, and contribute to creating a better reality.

Last Sunday we celebrated Pentecost: the anniversary of the founding of the Church and the advent of the Holy Spirit. The early church offered an alternative vision for our world which is suffering under the yoke of sin and darkness. It was a church that proclaimed the good news that God is love and that He loves the world–the whole world–without discrimination.  It was a church that demonstrated the reality that God sent Jesus as Savior and Redeemer who laid down a new path that leads to a better life. On Pentecost, we see Jerusalem in its most beautiful form: the Capital of Peoples.  It is a totally different picture than Jerusalem we know today. God’s spirit removed all kinds of barriers, including ethnic and national barriers! We read about the diversity of that church and how they were all united with the Spirit of God.

“Then how is it that each of us hears them in our native language? Parthians, Medes and Elamites; residents of Mesopotamia, Judea and Cappadocia, Pontus and Asia, Phrygia and Pamphylia, Egypt and the parts of Libya near Cyrene; visitors from Rome (both Jews and converts to Judaism); Cretans and Arabs—we hear them declaring the wonders of God in our own tongues” (Acts 2: 8-11).

The Holy Spirit also removed all social barriers. Here we see the significance of the quote from Joel’s prophecy:

Here, we see absolute equality and justice. Here, we see that the Spirit of God does not divide, but gathers together.

Let us also not forget the values ​​embodied by the early church included participation and caring for the poor and the weak. Contrary to the world philosophy, they shared their belongings and what God had given them. Since the beginning of the church, they dedicated deacons to care for the poor and weak in society. This was the advantage of the first church.

The Church, the body of Christ, His bride, must present to the world a different paradigm and must embody a reality that is different from our current one – a world where mercy, truth, love and real freedom prevail. I feel sad when at times I see the Church living away from these ideals, while justifying racism, absolving the strong and the rich, losing their empathy for the suffering, and neglecting the gift of lamentation.  When the church cares primarily for itself, while forgetting and neglecting its surroundings, it forgets and neglects itself.

On the other hand, I find a great deal of solace when I see the Church preoccupied with the work of the Kingdom— the Kingdom of Christ, the Son of God—calling for truth, protecting the weak and embodying equality. This is our call: to proclaim the gospel, and to reflect it with our words, our behavior, and our ministries.

Today, we are called not to be satisfied with our current reality.  We are called to be brave and strong by the power of the Holy Spirit and to go to our world as the early Church did: free from fear and spreading the gospel message about the possibility of a better world through Jesus Christ.

Our call is to pray for and support our ecclesiastical institutions, all those who work to fight all kinds of discrimination, racism and hatred, and those who work for truth and justice. Let us contribute to the change we want to see in our world.  This is our moment.